Exit Signs by State - Comply with Your State and Local Regulation

There is often confusion over which colors are allowed when choosing an Exit sign for your building. Exit sign requirements vary by state and municipality, which is why it's important to check with your Fire Marshall to see whether Green Exit Signs or Red Exit Signs are required in your building. The information below is for general guidance, only. For many, however, it is also important to get a “sense” of any color preference – so that your building is as consistent as possible with others in your area. Even though the European Union generally uses Green Exit Signs (Red is used to specify prohibited actions), our UL 924 standards allow either Green Exit signs or Red Exit signs. Yet, localized codes often specify one or the other.

New York State Compliant EXIT Signs
State Summary
New York City requires red Exit signs. Influenced by international stardards, New York City has endorsed a new code requiring high rises to have glow in the dark exit signs with a pictogram. This may have to do with the vast number of foreign visitors in New York high rises, and the vital importance of a fast Exit procedure during a high-rise emergency. Here is a direct excerpt from New York State Code [C26-606.2] 27-384 Power source: "The letters of exit signs shall be red. The background of externally lighted signs shall be white. The background of internally lighted signs shall be either stenciled metal with a light gray or white color, or translucent frosted, opal glass, slow-burning plastic, or the plastic edgeglow type with white plastic separators. The letters for internally lighted signs shall be translucent red." Additionally, any door, passageway, or stairway, that is not an exit or that is not a way to an exit must have a NOT AN EXIT sign, or directions to the nearest viable Exit. Unlike any other city, New York City requires 8-inch high lettering for its Exit Signs, all of which must be red.

Upstate New York and Long Island are not held to this strict standard for size, color and design. If you are outside of New York City, see our "Other Suggested LED Exit Signs for New York" department below for more options. 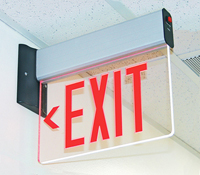 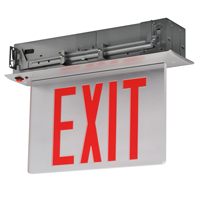 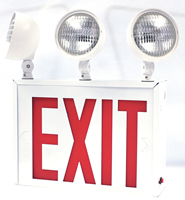