Shelter and the Signs That Point The Way
In 1939, a fictional twister swept across the screen and carried Dorothy far from her home in Kansas to the mystical Land of Oz. While Dorothy battled an evil witch and a crazy wizard, her family was safely waiting out the storm in an underground cellar. Despite the allure of the dramatized adventure of being swept up inside a tornado, we at SmartSign suggest the Aunt Em alternative: heading underground to a safe shelter. 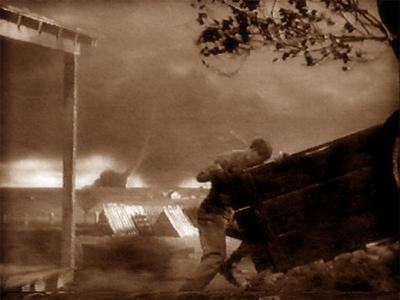 A shot from the classic twister film The Wizard of Oz shows farm workers heading into an underground storm cellar.
Tornadoes can be some of the most devastating natural disasters, especially when they strike where people are not prepared. Tornados can occur spontaneously under the right weather conditions and aren’t always characterized by the typical funnel shaped cloud. Still, when a tornado strikes, being prepared is the key to survival. Tornadoes occur more often in the United States than in any other country, so Americans need to be extra learned in proper tornado procedure1. They claim hundreds of lives each2 year , most often to those caught unprepared in their deadly paths. 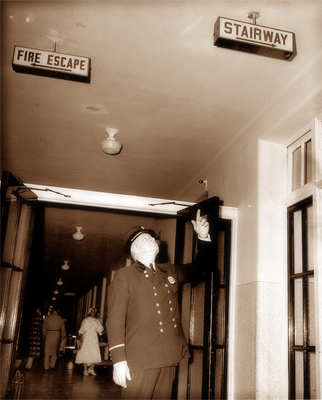 January 3, 1952—Fire Marshal Thomas J. Connaven points to new Exit and Stairway signs in a tuberculosis sanatorium.
In a natural disaster, the initial instinct is often to panic. Familiar rooms and neighborhoods suddenly become strange, confusing places. The best way to be prepared for any natural disaster is to have a plan, a place to go, and signs to point you there. Sometimes the five seconds it takes to decide whether to turn right or left are the most valuable seconds you have. Above is a picture from 1952 with a fire marshal pointing to newly installed emergency signs. In the 1950’s, like today, bold visible signage can be the difference between life and death.
Tornado shelters have long been the most desired destination, usually an underground cellar like Dorothy’s family sought in The Wizard of Oz. As Kansas is known to be particularly vulnerable to tornadoes, the family and workers on the farm were clearly prepared.
Planning Ahead: Safe Spaces Should Always Be Marked! 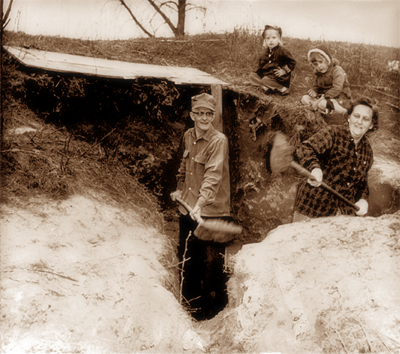 Bring on your tornadoes! May 3, 1956—Digging a shelter that will accommodate 12 persons, the Norman Spaulding and Peter Stellema families of Grand Rapids will be ready if more tornadoes drift their way.–AP Wirephoto
It’s best to make an emergency plan before a disaster strikes. During a crisis many people find themselves panicking and feeling overwhelmed by fear and stress. When skies get dark, winds begin blowing strongly, or alarms start sounding, familiar places begin to look strange and foreign. It is important to have a plan in place to prevent panic and fully utilize all the time you have in the most effective way possible. Emergency Shelter signs can be some of the most important additions to any building. Signs directing you to a fire escape, emergency exit, or fallout shelter can be invaluable during an emergency, and it is important to properly prepare well in advance.

Always look for signs in a disaster, telling you where to go for safety.
Always have a plan in place for any type of disaster. Make sure every member of your family knows where to go if you are in your home. If you are in a public building, take note of signage. It is required that all buildings clearly mark all emergency guidelines. As signs like these became mandated, people came to expect directions in an emergency. Not having signs like these in place can be deadly in a moment of panic. 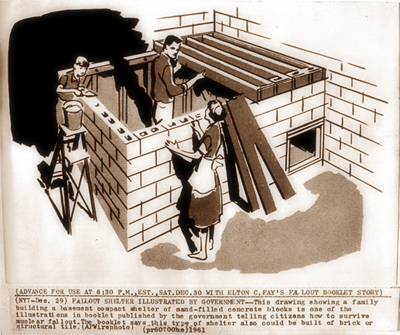 December 29, 1961 Fallout Shelter Booklet Illustrated by Government
In addition to knowing where to go in an emergency, those signs also need to lead to an appropriate shelter. In the 1960s3 , the government encouraged the building of fallout shelters in case of nuclear attack. These shelters often doubled as a tornado shelter, especially in susceptible areas like Tornado Alley. Building any type of shelter either inside or near your home can be somewhat pricey and time consuming, but there is immeasurable value to being prepared when disaster strikes.
1 Encyclopedia Britannica Online, s. v. "tornado", accessed June 26, 2012, http://www.britannica.com/EBchecked/topic/599941/tornado.
2 National Weather Service, "Storm Prediction Center."Last modified January 2012.Accessed June 26, 2012. http://www.spc.noaa.gov/climo/torn/2011deadlytorn.html.
3 Irish, Adam. Greater Greater Washington, "Fallout Sheters: Cold War history in your neighborhood." Last modified November 10, 2010.Accessed June 26, 2012. http://greatergreaterwashington.org/post/8047/fallout-shelters-cold-war-history-in-your-neighborhood/.
© 2020, SmartSign.com